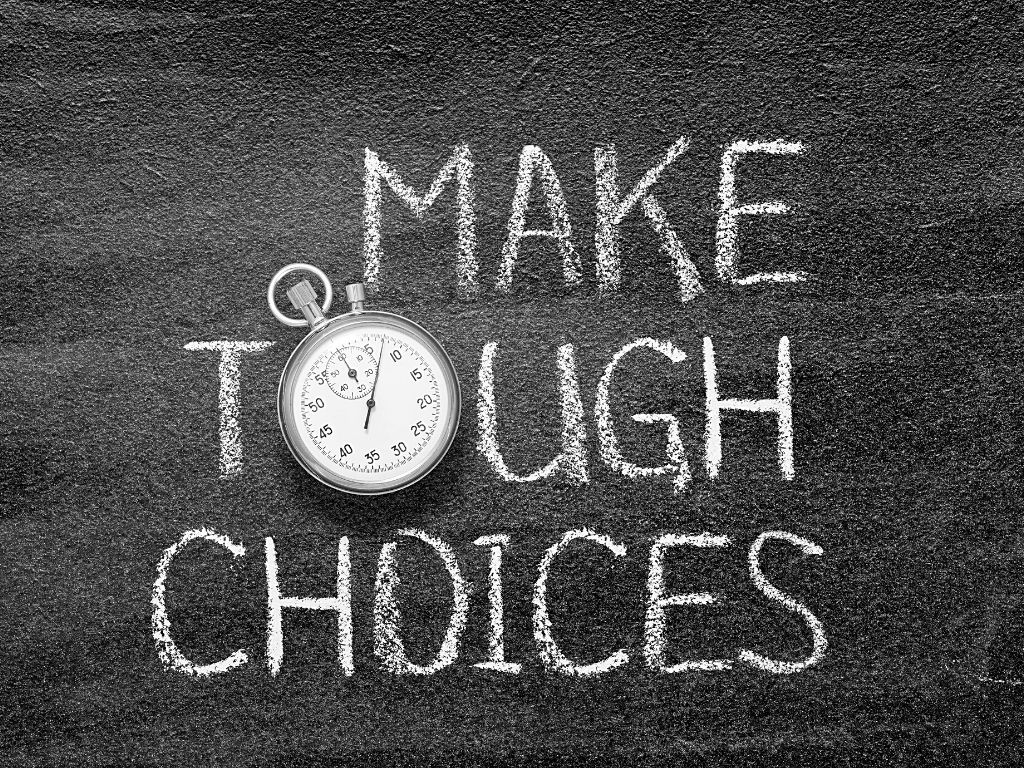 As I walked to the gym I saw this scruffy looking guy waving for me to come over and speak to him.

And my first thought was to carry on walking because he didn’t look like the kind of person that I wanted to stop and chat to.

And as I approached him I could see he had some weird tattoos on his face. Two upside down crosses under his eyes.

And as he started to talk at me. I said to myself…

‘Get me the fuck out of here!’

I started to think about how quickly I could get myself out of this conversation.

THE SIGNIFICANCE OF A RANDOM CONVERSATION ABOUT MAKING SACRIFICES

And as I stood there being talked at the conversation switched to something which stuck with me.

He started talking about Serena Williams who the day before had thrown a massive tantrum when she lost the Wimbledon Final.

So why did this stick with me?

Because he went on to talk about the choices she’d made prior to that tournament.

That she’d recently taken a break from tennis to have her first child And that because of that decision, she was not in the best shape to be winning tennis titles again just yet.

And in his eyes she couldn’t accept the fact that because she’d paused her career to start a family it might mean she wasn’t the best tennis player any more. Hence the tantrum.

And the point he was trying to make was that she had made a sacrifice. She had sacrificed being the best tennis player to start a family.

Now I’m not sure I agree with his perception of these events, but it was this idea of making sacrifices in your life that stuck with me.

And it got me thinking.

Maybe I have to make some sacrifices in my life to get what I want?

If I want to do this, then it means sacrificing that.

I might have to make some tough choices because to create the life I want, I might temporarily have to let go of some aspect of my life that ideally I don’t want to.

And it’s what happened next that made that conversation stick in my mind.

You see he wasn’t just some weirdly tattooed scruffy looking man on the street.

He was a street artist and the whole time we’d been talking he had been making me something.

So as our conversation drew to a close he held out his hand to give it to me and when I looked down I could see he’d made me a small figurine out of a wire coat hanger.

Which made me look around at where he’d been sitting. I could see there were lots of other artworks he had created.

But they were all figurines doing activities like boxing and dancing whereas what he’d made for me was a solo figurine, which was completely different to everything else he had made.

Well, the reason that moment was powerful for me was because the figurine he’d created looked just like the main sculpture at Burning Man where I’d been for the first time the year before.

So as I looked at it I had this feeling that this was something more than a random conversation with a street artist.

That there might be some significance in this moment.

And as I walked off to carry on with my day I couldn’t stop thinking about that conversation.

When I told my wife she had that look in her face of.

I think you’re reading far too much into this.

Her face hasn’t changed since.

But I don’t believe in chance. I believe that when you’re open to life and aware of what’s going on around you.

That life is constantly sending you signs and signals about your life.

It’s like she’s giving you the option for different paths to follow, ideas to explore and lessons to be learned.

Or sometimes they’re just a signpost telling you that you’re going in the right direction.

But so often we don’t see them or read much in to them.

But if you’re aware, you’ll start to notice how often these seemingly random events occur. Events which will make you take a moment to pause for thought.

You may well find that they’re just signposts to say, ‘keep going, you’re on the right path’.

But sometimes they’re messages that are worth taking the time to remember and think about .

And since that moment the word sacrifice has sat in my mind because I just felt that this wasn’t a random conversation with a stranger or a signpost telling me I was on the right path.

I knew it had some significance, but I couldn’t quite put my finger on it.

Because in November 2019 my wife and I decided to follow our hearts. We sold our flat, quit our TV jobs and left the big city to start creating our dream life.

And not for the first time, we said goodbye to the people we love.

But unlike previous big moves in our life, this time we weren’t moving to another big city to get a job doing what we’ve done for years.

We were starting again thousands of kilometres away from all of our friends, to live in a small town where we knew absolutely no one.

And making that decision has seen us make HUGE sacrifices, because our friends and family are the most important thing to us.

But we decided to sacrifice being with them and being near them.

But no only that, we’ve also sacrificed our social life and making new friends where we now live because we’re committed to making our dream a reality.

So we don’t have to go back to the life we used to live.

We’ve made sacrifices we felt were needed, so we could create the life we wanted.

REFLECTING ON A CONVERSATION ABOUT SACRIFICE

And as I sit here writing this now in September 2020 I keep thinking back to that moment when I stopped to chat to that street artist.

Was it a random event?

Have I tried to attach meaning to something that was meaningless?

Or was it synchronicity?

Was it a message telling me to think about making a sacrifice to get where I wanted to in life?

Because that day when I stopped for a chat with a stranger, I’d decided to take the long way to the gym for the first time.

Taking the scenic route over the most efficient one.

And when I saw this man waving me over, my mind was telling me to keep walking, to get out of this conversation as fast as possible, but my intuition compelled me to stay and listen to him.

To talk to him.

And as I reflected on this conversation over the weeks and years since, I knew there was something meaningful in that moment.

I knew it was more than just a random event with a stranger.

Life was sending me a message that I needed to hear in the form of a weirdly tattooed scruffy looking man talking to me about Serena Williams and the concept of making sacrifices.

And it’s now because of making sacrifices in my life, that I’m starting to live the life I wanted, rather than a life I’d regret.